MCI contributes to the IECT International Summer School on Entrepreneurship

27 international scientists with entrepreneurial ideas, and the intentions to launch a startup have participated in this one-week intensive program. The program was composed of an inspiring blend of lectures, courses, workshops, and mentoring sessions to help the participants turning their ideas into reality. The IECT Summer School has shown that when different actors in the regional eco-system play together and use international linkages great impact can be achieved.

The Summer School was developed in partnership with the University of Cambridge and the European Forum Alpbach. It is hosted by the Werkstätte Wattens and sponsored by the Standortagentur Tirol and the regional chamber of commerce. National and international cooperation partners support the Summer School: Falling Walls Lab, TEC Alpbach Technology Symposion, Global Incubator Network, ICONS, Spectrum, and Management Center Innsbruck.

EEE project’s Bernd Ebersberger of MCI has contributed to the Summer School with a session on Markets & Competition on Saturday August 19. 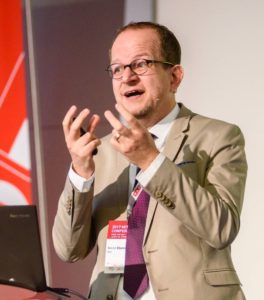 Prof. Ebersberger recently gave an interview about inspiration and innovation to Christoph Kristandl from the Red Bulletin in the course of the MIT Europe Conference.

He tried to answer the question what innovation actually means and why it has become so extremely fashionable within the last time, also talking about his own experience and how he succeeds in being innovative.

On 3rd May 2017 the MCI Innolab in cooperation with EEE project, CAST, I.E.C.E.T, and the Startup.Tirol was launched in Innsbruck, Tyrol.

During a six week Boot Camp MCI students had the possibility to work on and to bring forward their entrepreneurial ideas to the next level. With the professional support from coaches and experts from MCI, CAST, I.E.C.E.T., and Startup.Tirol eight participating student teams worked together in order to learn more about commercializing inventions, and starting up a company. All teams had been coached and mentored individually to foster their entrepreneurial ideas and visions.

The Boot Camp approach was adopted as a tool out of the Entrepreneurship Toolkit and included among others the module on Business Model Canvas. On 4th July 2017 at the end of the Innolab the teams presented their ideas and concepts during a pitching event. The best three teams had the possibility to participate in the I.E.C.T. (Institute for Entrepreneurship Cambridge-Tirol) Summer School organized by Herman Hauser and his team. The I.E.C.T. international Summer School program on entrepreneurship has been held from 17th to 23rd August 2017, where a number of 27 international inventors with entrepreneurial ideas and the intention to launch a start-up have participated.

The Innolab at MCI was a first initiative in cooperation with Startup.Tirol and the EEE Regional Alliance development. 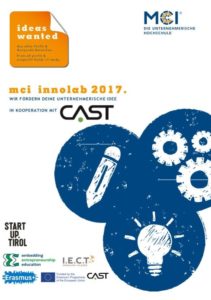 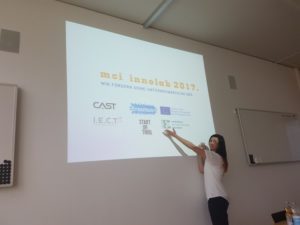 On 1st December 2017 MCI and Werkstaette Wattens organized the Innopun(s)ch workshop at ‘Base EINS’, the temporary start-up hub in the center of Innsbruck. The Werkstaette Wattens is an international business and creative center for founders, start-ups, and service providers at various stages of development, focusing on technology, innovation, and the creation of regional value and sustainable growth.

During this event 20 participants with different backgrounds in entrepreneurship came together to discuss the latest topics in the field of innovation management. A special focus has been laid on interactivity and practice to not only understand, but even more to ‘feel’, ‘experience’ and ‘touch’ innovation. In this context modules from the Entrepreneurship Teaching Toolkit such as the Marshmallow Challenge and Collaboration Game have been introduced and tested. 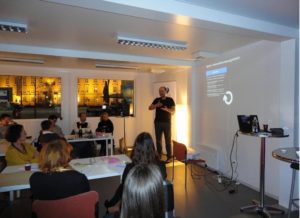 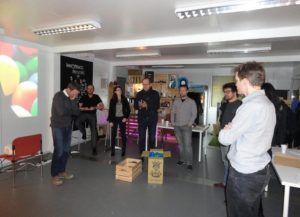 ©all rights on images used in this article belong to MCI

Halle Wraps up an Eventful Month

On 27.04.2017 Mr. Florian  Bratzke, European Project Officer at EEE Partner Univations GmbH, joined an one day PR workshop organised by German Academic Exchange Service DAAD in Bonn. During the workshop, innovative techniques for dissemination of project progress and results have been introduced to German Erasmus+ consortium leaders and partners. Going along with the high internal quality standards set to guarantee the project’s success, EEE partners agreed to intensify their efforts to disseminate project related outcomes. The insights from the DAAD workshop will support EEE partner to life up to this goal.

On May 5th, Daniel Worch, CEO of EEE Partner Univations GmbH, has met with representatives from Saxony-Anhalt EU-Service-Agency to discuss the German EEE national launch which will take the 21st of November 2017 in Halle. During this high-level one-day-conference, participants from HEIs, VETs, Business and the political scene will be introduced to the main outcomes of EEE asked for productive feedback to improve the open educational resources. As the event will be organised in conjunction with Saxony-Anhalt EU-Service-Agency, EEE related subjects will be also part of the agenda and presented by guest speakers. One of the main speakers will be Mr. David Fenners, Policy Officer for Research & Innovation, State Aid & Procurement and Regional Policy at the Representation of the State of Saxony-Anhalt to the EU. Univations will host the event at the heart of Technology Parc Weinberg Campus.

The German branch of the EEE consortium has met for the 3rd Regional Alliance Stakeholder Meeting on 18.05.2017 in Magdeburg, capital city of Saxony-Anhalt. After a short introductory note from Univations CEO Daniel Worch, Stakeholders were introduced to the latest developments within EEE and informed about the German EEE National Launch taking place 21.11.2017 at Technology Parc Weinberg Campus in Halle. One part of the event the was also dedicated to Prof. Dr. Graham Hortons Founders Playbook, which has the potential to ideally complement the EEE Teaching Toolkit when it comes to the point where students actually want to start-up a company. Prof. Horten explicitly asked participants to contribute their expertise to the Playbook, a process the EEE consortium has started as well with the pilot testing of the first module from the EEE teaching toolkit during the MLU Gründerservice Entrepreneurship week in May. As a matter of fact, stakeholders of the 3rd EEE alliance meeting agreed to intensify cooperation in the next months in order to draft a set of joint actions for improving entrepreneurship education in the region.

Second consortium meeting of the EEE Project was hosted by the University of Szeged (SZTE) Knowledge Management Center in the city of Szeged, Hungary. The meeting set the platform for the project representatives to share progress on their work packages, and discuss arrangements on the pilot-testing of the entrepreneurship courses in partner locations.

The two-day program gave the participants the opportunity to present their work in detail on the major agenda topics, i.e. the development of the EEE Alliance Road Map, EEE Teaching Toolkit, multimedia resources, and project dissemination activities, as well as exchanging ideas on the upcoming tasks, in particular, possible platforms for the pilot-testing of the courses in the partner universities- and potential challenges in implementation. The presentations overall have led to productive discussions on the nature of the ‘EEE Regional Alliance Development Roadmap’ (SZTE), and the teaching methodologies of the individual modules presented in the ‘EEE Teaching Toolkit for Entrepreneurship Education’ (MCI).

Szeged team has taken concrete steps to offer their 5-credit new EEE course ‘Entrepreneurship Education’ to USZ students from 11 study programs, starting from September 2017. The course is highly promising in its offerings. In the model, not only the business leaders will be involved with the course lecturing, but also the Department of Economics Master’s program students will provide mentoring to the enrolled students throughout the semester. Pilot teaching of the courses are  foreseen to take place at the ‘Entrepreneurship Camp’ in the summer of 2017 at MCI, during which coaching and mentoring sessions are offered to MCI students, and at ‘Entrepreneurship Weeks’ in May 2017 at MLU, in collaboration with the Univations EEE Project representatives. 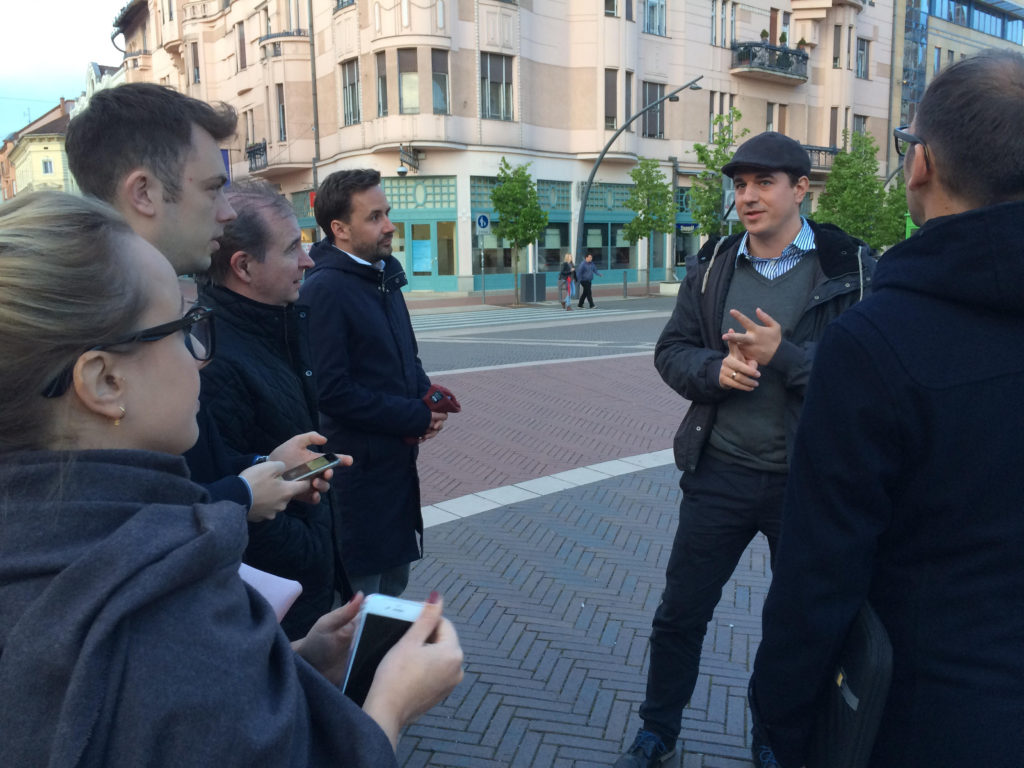 The meeting was a success in terms of its outcomes, supported by the generous hospitality of the host partners. The participants enjoyed a city sightseeing tour after the first day of the meeting, followed by traditional Hungarian dishes and drinks during a dinner organized by the Szeged project representatives.

The next partner meeting is planned to take place in Lisburn, Northern Ireland, on 17-18 October.