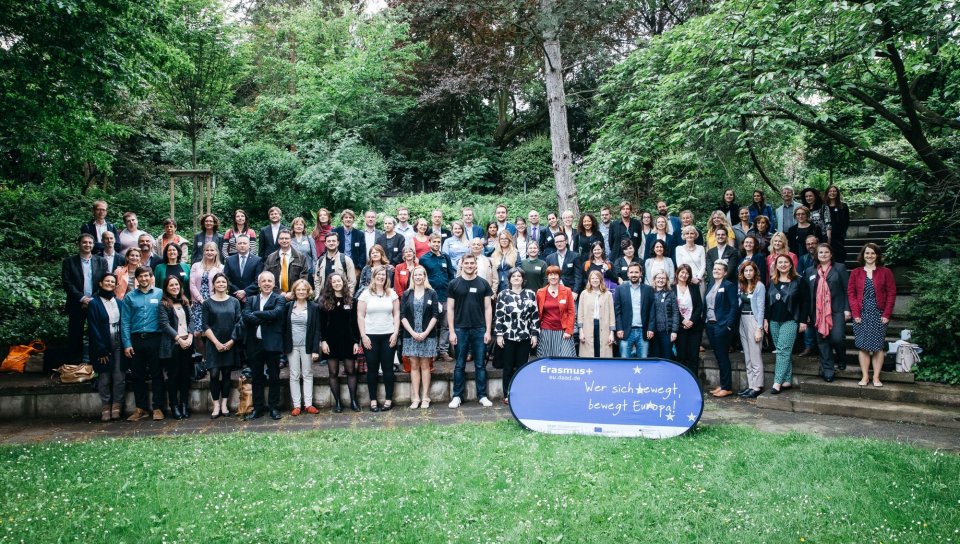 From the 16th to 17th of May, the NA-DAAD hosted a Transnational Cooperation Activity (TCA) on dissemination, sustainability and impact in Erasmus+ Strategic Partnerships at Wissenschaftszentrum in Bonn. The EEE project has been selected as a good practice example and was given a chance to be introduced to a high-level group of European HEI and Erasmus+ NA representatives. 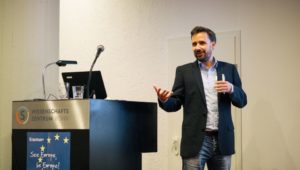 In his presentation Florian Bratzke – responsible project officer at EEE Project Lead partner Univations GmbH – introduced the participants to the EEE fundamentals and intellectual outputs of the project. Those include EEE Teaching Toolkit and the Roadmap for establishing regional alliances for promoting entrepreneurship education in the region. Furthermore, he emphasized main EEE dissemination achievements such as winning La Trobe University as associated project partner, being selected for the EntreComp Into Action and involved present stakeholders into a vivid discussion on efficient impact and sustainability measures based on the successful experiences made within the EEE project.

The presentation was an integral part of a transversal workshop on entrepreneurship, entrepreneurial learning and labour market issues and was moderated by Mrs. Dijana Stilinovic of AMPEU (NA-Erasmus+ Croatia). Another highlight of the 2-day event on Bonn was the presence of Mrs. Elena Tegovska of the European Commission (DG Education, Youth, Sport and Culture) who presented valuable insights on dissemination, sustainability and impact from a European policy perspective. Mrs Tunguska’s contribution as well as all other inputs of the TCA can be downloaded at the NA-DAAD: https://bit.ly/2keJtbX.

©all rights to images used in this article belong to DAAD 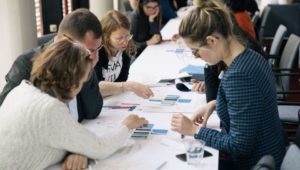 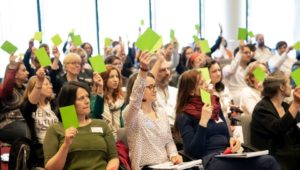 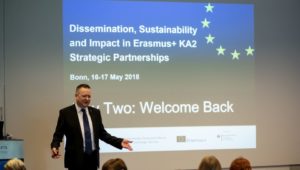 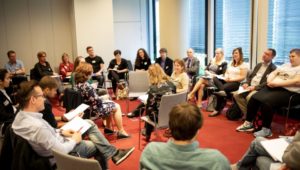 On November 30, 2017 Magdeburg-Stendal University of Applied Sciences opened its doors for the 6th stakeholder meeting of the EEE regional alliance in Halle/Saale, Germany. In addition to discussing further strategies for strengthening the co-operation within the alliance, the regional EEE project’s stakeholders were introduced to the latest version of the Entrepreneurship Teaching Toolkit – a compilation of effective methodological and functional approaches to embed entrepreneurship in the academic curriculum design.

The Entrepreneurship Teaching Toolkit offers a variety of possibilities to improve students’ entrepreneurial skills and allows for academics’ creativity in curriculum design through its modular structure. The developed modules – hence tools – focus on fostering students’ individual entrepreneurial competences to support innovative thinking and start-up creation both in theory and practice. Moreover, the toolkit includes course materials and case studies that can be customized for student-business and social entrepreneurship courses. The Entrepreneurship Teaching Toolkit also promotes external engagement and involvement of the business sector in educational programs at higher education institutions.  The online version of the toolkit can be accessed here.

The toolkit has received positive feedback from EEE project regional stakeholders. In fact, Magdeburg-Stendal University of Applied Sciences currently aims to revisit curricular content to incorporate entrepreneurship education course modules and related learning outcomes into selected programmes. In this respect, EEE project has noticeably promoted the awareness and motivation to incorporate entrepreneurial education in academic curricula for this specific institution. The next step will be an establishment of the constructive dialogue among the internal university stakeholders on potential integration of EEE project resources into the teaching activities of the university. The EEE team of Univations GmbH has agreed to support this dialogue by further promoting the toolkit and explaining its underlying methodology to relevant stakeholders.

In his introductory note, Mr. Bert Arnicke of Bio-Zentrum Halle took chance to highlight the importance of European cooperation projects as EEE for the international recognition and visibility of Weinberg Campus Halle. Furthermore, Mrs. Claudia Zott (Head of EU-Service Agency Saxony-Anhalt and co-host of the event) stretched the point that the European Project is undergoing hard times but is more important than ever for nurturing prosperity and peace in Europe. As such, successful European partnerships like EEE are important not only because of the valuable resources that are developed in such projects but also for establishing strong ties between Europeans on a personal level. 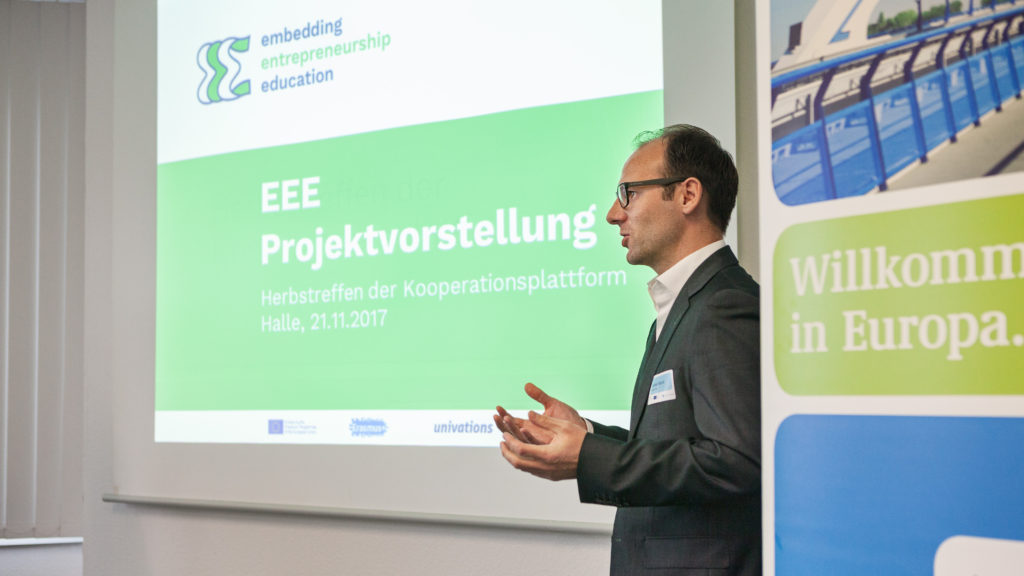 In the plenary session of the national launch Florian Bratzke and Daniel Worch explained EEE targets and educational intentions to the participants as well as how an inter-European project as EEE fits in with the long-term strategy and mission pursued by Univations GmbH. Their presentation was followed by an insight view on current developments of EU policies provided by Dr. David Fenner of the Representation of the State of Saxony-Anhalt to the EU. After the plenary session, the participants were asked to split up into separate work shop groups to detail the discussion about EEE outputs and potential involvements in Erasmus+ funded strategic partnerships. Overall, the EEE representatives received very positive and valuable feedback on each EEE intellectual output. As a matter of fact, participants feedback will be exploited to further ameliorate EEE intellectual outputs which are made available in beta version on the official EEE Learning Platform (http://www.eee-platform.eu/). After participants were given chance to attend both workshops, this part of the national launch was concluded with a qualified workshop summary provided Dr. Susanne Hübner, Head of the Start-Up Service at Martin-Luther-University Halle-Wittenberg.

At the end of the EEE National Launch Germany, Mrs. Kathrin Hamel of EU Service Agency Saxony-Anhalt took chance to quickly inform all present guests about upcoming funding possibilities in the year 2018 as well to point to the valuable assistance her agency provides for stakeholders interested in getting involved in Erasmus+ as well as other European funded projects and partnerships.

The EEE National Launch in Halle/Saale, Germany has been the first of a series of EEE national multiplier events in Innsbruck (Austria) and Szeged (Hungary). The launch events on national level are a prelude to the international presentation of all EEE resources that will take place alongside the high-level UIIN University Industry Interaction Conference in London from 20-22 June 2018 (https://www.university-industry.com/).

The Univations Investforum Pitch-Day 2017 took place recently in Halle at the ERDGAS Sportpark, with the attendance of 26 start-ups who successfully pitched their business models to 70 investors.

In the past, start-ups were able to convince venture capital funds and business angels to invest sums ranging from 100.000 to 5 Million Euro into their business ideas. Now, however, for entrepreneurs who look for start-up capital the market can be rather competitive, for there are a lot more creative ideas and and investors have to spend a lot more time to assess success factors before they put money into new opportunities. Investforum Pitch-Day 2017 was marked as one of the platforms where competitive minds and investors with questions are brought together for an exiting marathon.

The event mainly focuses on companies that are still in the seed or early start-up phase – a typical period where innovative companies in Germany have problems to raise capital. As such, Investforum has become one of the main matching events for innovative start-ups in the new German States during the past years.

Daniel Worch, CEO of Univations, and as such responsible for the event, took the chance to present the Erasmus+ project Embedding Entrepreneurship Education to the participating guests. Due to the presence of high-quality start-ups, the event naturally has not only attracted investors, but also start-up coaches as well as trainers involved in entrepreneurial education from all over Germany – target group of the intellectual resources developed within EEE.